Ok, I know it's been a while, but life should return to normal and now I have time to return to my blogging.

So what has been happening in the Seagram's life.

Well, I have decided to make a major career change, and as most of you know, left SAP, and have decided to go into Real Estate. I have just finished completing a 3 week intensive Real Estate Licencing course. I wrote my final State Exam last week and passed with 92.5% on the State Law portion of the Exam and 90.5% on the National Law portion. I have already had interviews with Coldwell Banker and Keller Williams, 2 large Real Estate Broker firms, and have made a decision to join Coldwell Banker. http://www.coldwellbanker.com/
I am very excited about my new career and will keep you all updated on what's happening, time to build those contacts!.

Other than my life being on hold for the past 3 weeks, there have been some exciting things happening. We had Melissa's Bridal Shower at the end of May, where we totally surprised her. The shower was held at Jaclin's house and we had some great fun playing some games, eating and opening gifts. The wedding is in September in Breckenridge, and I am looking so forward to it. I volunteered to make Melissa and Art's wedding invites, because the quote we got was just ridiculous. I agreed to hand make the invites and a 1/4 of the price, and I must say they came out beautifully. Melissa and Art loved them, so I was happy. 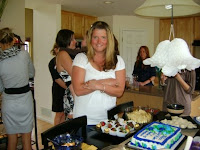 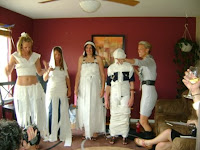 Who's designed the best wedding dress? 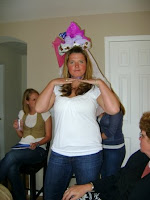 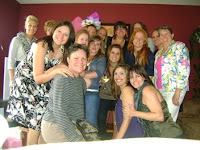 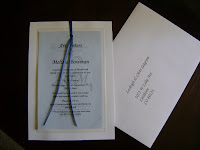 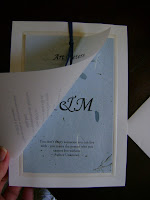 The invite had 2 layers, invite words printed on the top on sheer, transparet wax paper, and love quotes with Art and Melissa's on hand made paper with feathers.

Joni, a fellow colleague of Chris's, invited us to her house for a private showing of Jonah Werner. We had a barbeque and then all got comfy to listen to Jonah play his guitar and sing. He was brilliant!!! He had just got back from touring Europe, and his music is very different. He sings about his life experiences, half talking, half playing guitar and singing. Check out his web-site: http://www.jonahwerner.com/index2.htm 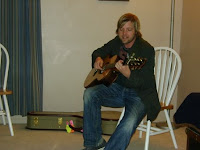 It is summer here in Denver, and I am LOVING IT! Our garden is growing like crazy and everything is super green. We have had tons of rain this summer, which is a little strange for Denver as we normally have a drought in summer with little to no rain. We spend some great time potting around the garden, Chris mowing the lawn every weekend and me weeding and trying to plant flowers, half of which died, but I'll get there. 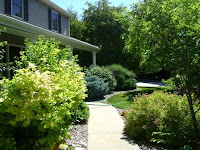 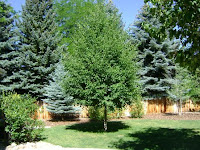 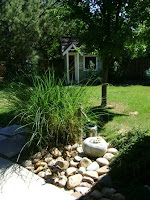 The water fountain where the snake likes to hide 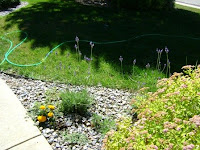 My laveder bushes, well the ones that survived anyway.
And with summer and gardens, we have also discovered some other things. While Chris was working on the sprinkler the other weekend, a snake almost slithered right over his hand. We finally found it and killed it, as we did not know what it was or if it was poisonous. We later found out that it is some sort of a house snake, non-poisonous, but not pretty looking either. Since then, I have run into another 4 of them, in the garden, especially around my little water fountain, we leave them now, as they eat rats, mice and spiders but they still freek me out. 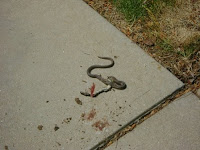 We have also had the most amount of tornadoes in Denver this season. The are more toward the East, and rarely come close to the foothills where we are, but I still get shivers down my spine when watching the news, which is then interrupted by a emergency message about some tornado.

Denver, for those of you who are not aware of this, is also a big Rugby place, which one of the largest rugby training grounds in the States. Denver hosted the Churchill Cup, which saw different countries playing against each other. Our SA friend, Jasper, invited us to go and watch, and Iwan and Liezl joined us. It was a great afternoon, chatting to everyone, speaking Afrikaans and watching some Rugby. Not even the tornado siren which went off and sky's turning black deterred us from a good time, eventually the tornado warning expired and then the rain came down, which was toward the end anyway, so we all called it a day. 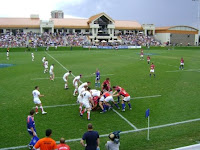 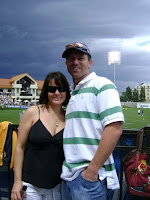 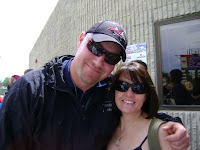 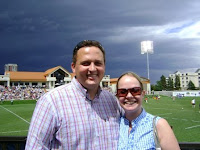 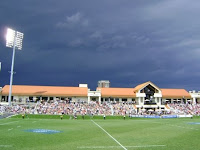 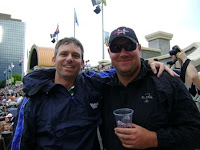 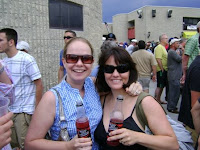 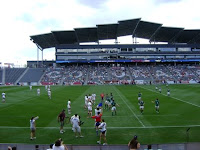 The final game which Chris went to watch the following week
2 weeks ago we had our neighbourhood garage sale. Every one was up bright and early to see what there was on sale, before the general public were allowed in. Chris and I took a stroll around the neighbourhood, but in the end only bought a cake mixer for $5 and a tennis racket for $5. Later that afternoon, everyone came over to our place for a braai, Chris bought some cup-cakes for the kids, which they totally loved. 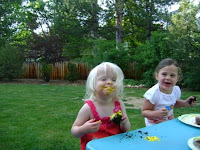 Chris did a hike this weekend with the boys at Golden Gate Canyon, and saw some of the most amazing views. He's getting prepared to climb a 14'ner this summer, once the snow melts at some of the peaks, they will be able to climb. I am back at gym, and hopefully getting fit enough to join him and I'm training for the Denver half-Marathon, which I am aiming to run later this year.

Other than that, we have been enjoying the lovely weather, Chris is playing some golf and tennis with the neighbours, and we are planning a camping trip for August.

For those of you who were wondering about my friend Toni, she's doing well and the baby is getting sooo big. The baby is due on the 4th September, so exciting! To get all the details, check out her blog: http://woollamworld.blogspot.com/
Good luck Tones!

This weekend is 4th of Jult celebrations, looking forward to that, with lots of fireworks and fun!
Posted by Lesleigh at 11:15 AM 1 comment:

Thanks Odette for your e-mail gently reminding me to update my blog. I apologise for the lack of updates, but it has been a little bit of a strange time.

I have started my Real Estate course, now that I've decided to get into Real Estate and start making some money, I need to get a licence for Colorado so I can practice. That should finish up at the end on June, and by then I would have chosen my preferred broker to work with All very exciting.

Other than that, summers here and Chris and I have been working in the garden, we even found 2 snakes, almost like a brown house snake, but a snake never the less, yikes. I have started my running again. I would like to do a few races this summer.

That's s short update before I need to dash out the door, but I promise to update this weekend with lots of new pics.

ser·en·dip·i·ty
Meaning: The occurrence and development of events by chance in a happy or beneficial way: "a fortunate stroke of serendipity".